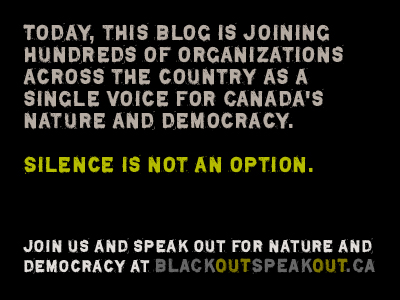 Today, June 4, 2012, concerned individuals and organizations are showing their solidarity against the actions the Canadian government is taking to downgrade protections for our environment through Bill C-38 now proceeding through parliament. Bill C-38 is a cynical omnibus budget bill that will make wholesale changes to the Environmental Assessment and Fisheries acts. Such changes will threaten fish and wildlife habitats for years to come.

In short, timelines for environmental assessments of major pipeline and other projects will be shortened, compromising the value of much of the data collected. The federal environment minister will have increased powers to decide which projects will be assessed, and the cabinet will have the power to decide which projects proceed in spite of what an assessment might determine. Under the revised Fisheries Act, only fish species of “economic value” will be protected, ignoring the value of all aquatic habitats to the well being of all fish, wildlife and people. As well, the feds will be able to download responsibility for fish protection to the provinces and “conservation groups”. Are provincial governments and conservation groups prepared to pick up these challenges and pay for them?

Omnibus bills are most often the tools of a minority government trying to force support from reluctant opposition parties by attaching unpopular issues to needed legislation. However, a majority government need not use such a tactic as it can guarantee passage of any bill. The Conservatives attached these environmental and fisheries act changes to the budget bill to speed their passage and clear the way for the hurried construction of pipelines and other developments. The problem is that any committee considering changes to the bill will be financial and not environmental. As a result, there will be little time to address the significant inadequacies of the legislation and convince the government to make needed changes.

The environment and fisheries acts represent the blood, sweat and tears of generations of anglers, hunters, naturalists, biologists and forward thinking politicians who saw how destructive non-renewable resource development can be on our environment and fish and wildlife resources. They worked to ensure that future development took renewable resources into account. Rolling back the legislation or downloading responsibilities is a cynical rejection of the values Canadians have for their environment, including fish and wildlife.

If you share my concern about these issues, please express your concern to members of parliament, your colleagues, friends and followers. Go to www.blackoutspeakout.ca for more information.