[Note: The following was first published in the March 2013 Alberta Outdoorsmen.]

One of the things I enjoy about still hunting is how acute my senses become trying to detect any small sound, sight or scent that might provide a clue to the presence of a game animal. Of course, the game animal is my primary target but such sensitivity also allows me to observe a lot of other things along the way. 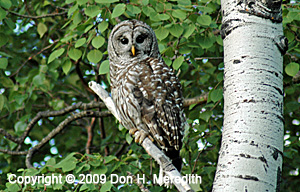 Barred owls are often active during the day but can be easily missed if one is not observant.

That’s what happened one November afternoon when I was still hunting through some bush along the bank of a river. I was following game trails over ridges and down ravines, being careful to go very slow and stop often to listen for other animal movements, perhaps in reaction to mine. As I stopped before entering an opening, I heard the staccato “chik, chik, chik” of a red squirrel defending its territory. Only this call was shriller and louder than normal. I searched the shrubs and blown-down trees ahead of me to find a Cooper’s hawk stooping at something at the top of a scrub willow. I quickly identified the object as the red squirrel, now diving into the protection of the shrub. Missing its target, the hawk perched in a nearby poplar to watch. The cheeky squirrel returned to the top of the shrub and started its tirade again, obviously directed at the hawk. The hawk lifted off and stooped the squirrel again. The squirrel once again dove for cover, avoiding the hawks talons by millimetres.

The hawk came to my side of the clearing and perched in a spruce to watch the bush where the squirrel disappeared. I watched too, totally fascinated by this little drama. Soon, the squirrel climbed the shrub, spotted the hawk, and renewed its tongue lashing. As if following a script, the hawk launched off its branch, swooped down on the squirrel as the latter dove for cover. This time the squirrel didn’t wait but made a run for the safety of the far spruce trees. On its way, it screamed at the hawk trying to get at it through the tangle of willow branches. The hawk gave up and returned to its perch in the poplar tree. The squirrel stopped on the ground two or three metres from the spruce trees and resumed its chatter, although a bit subdued. A staring contest ensued for two or three minutes before the squirrel finally made a last sprint for the trees. The hawk launched but missed the squirrel as the latter rocketed up a spruce tree. The hawk circled the clearing before returning to its perch. The red squirrel, now safely ensconced and out of sight in the spruce branches, continued its tirade. The hawk finally flew off. I resumed my hunt and soon became the target of the squirrel’s derision.

As the sound of the squirrel faded behind me, I thought of how easy it would have been to miss the incident if I had just been walking through the bush from point A to B, or indeed driving a quad or other motorized vehicle.

I have had many similar experiences while hunting, including waiting at deer stands. I carry a portable stool and some camouflage cloth with me when I’m deer hunting so I can construct a quick ground blind if I find a suitable place to ambush deer. When I describe this to people, some wonder how it is I can just sit there, restricting my movements, for the several hours I’m often at a stand. I explain it is relatively easy because of all the things I see by being quiet and camouflaged. Not only do I see deer, elk and moose but I also see many birds, small mammals and insects. I’ve watched mice and shrews flip leaves along the forest floor searching for insects, and weasels sniff my boots. I’ve seen marten chase red squirrels through trees, and once saw a fisher chase a marten. I’ve had a coyote walk right up to my blind, sniff my scent and then stare at me in shock for a split-second after I said “hello”.  It then rocketed away only to stop about 20 metres away to look back at me as if to confirm what it saw. 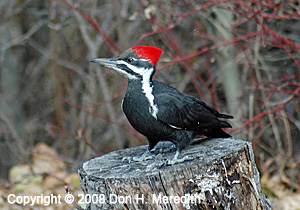 The pileated woodpecker is not often seen unless the observer is quiet.

I’ve been a naturalist, or someone who studies nature, for as long as I can remember. Indeed, I’m not sure what came first, the naturalist or the hunter. I believe I had interest in both at about the same time, but as a boy living in a large city it was much easier to develop my natural history interests. It wasn’t until I was a teenager that I was able to develop my interest in hunting. To me, it was just a natural extension of my interest in the natural world and eventually led to my becoming a wildlife biologist.

Unfortunately, most people these days don’t look at hunting and natural history that way. In our current society, where we prefer to categorize people before understanding them, it seems to be assumed that if you hunt, you must be some sort of person who hates nature because if you are truly interested in the natural world, you wouldn’t hunt, would you?

Well of course you would. I know many hunters and anglers who maintain bird and mammal lists and are interested in animal behavior of all kinds, not just the animals they hunt or fish. Indeed, some of the most knowledgeable naturalists I’ve met in the bush have been trappers who have a curiosity about all animals they encounter. I’m sure that curiosity makes them better trappers who also have a better understanding of their place in the world.

I would argue that an interest in natural history should be part and parcel of what a complete outdoor person should be. I cringe when I hear a hunter or angler complain about his or her licence money going to the study of a non-game species. While I agree much of that money should go to game management studies, non-game studies are just as important in terms of understanding how the natural world works and keeps all species (including game and ourselves) healthy. I’m proud as both a hunter and a naturalist of the contributions I make to that research in whatever way I can. We all should be.

It’s not hard to learn natural history, especially this day and time. All you need is a curiosity about what an animal (or plant) is and how it makes a living. Simple Internet searches will come up with much information, and of course there are the old, tried and true field books. You can even find this information using smartphone apps if that works for you. With access to this basic information, the best teacher is nature herself. Get out and get in it. Instead of riding a quad to a deer stand, walk. Even in the predawn you will hear and sense things you otherwise would not. And being a naturalist is not restricted by seasons. You can do it at any time of the year and stay active as an outdoors person year around. Being a naturalist is a soul-enriching hobby that makes your outdoor trips all the more interesting and exciting.

2 Responses to The Hunter/Angler as Naturalist