[Note: The following was first published in the December 2014 Alberta Outdoorsmen.]

“Well, the fish are going to have to get out of the way. I will not have weeds growing in front of my house!” That was the comment one member of the Wabamun Watershed Management Council (WWMC) stated at a council meeting after I had repeated what a fisheries biologist had previously told the council about pike needing aquatic vegetation in which to spawn and how cottage development had destroyed much of that habitat. My issue was that many of my fellow council members were conveniently forgetting this issue when discussing the health of Wabamun Lake. 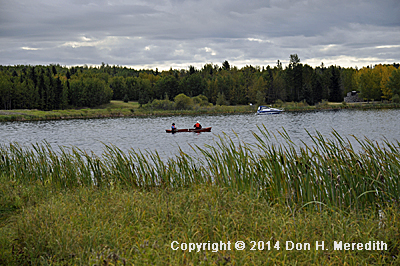 Healthy lakes and streams require a commitment by everyone to help keep them clean.

To be fair, it was the early days of the council when everyone who had been appointed to it (representatives from lakeside communities, federal and provincial governments, and environment and recreation groups) were in the process of learning what was threatening the lake’s health and how those threats might be stopped or at least mitigated. There were a lot of divergent opinions sitting around the table and we all were in the process of getting to know each other and our viewpoints. As the process proceeded over the months and years—where many experts in lake management and biology gave presentations—people started finding common ground and goals; and the WWMC has come a long way and indeed has been responsible for getting lake stakeholders and others to understand the problems and take action.

The point I was trying to make at that early meeting was that the lake’s fish populations were indeed the “canaries in the coal mine”. If the fish were not thriving, it might indicate the lake’s health was in some kind of trouble, regardless of whether you had vegetation growing in the water in front of your cottage or not. And if the lake’s health was in trouble then many of the reasons why people come to the lake were threatened.

The concern the council member expressed about “weeds” in the lake was what many of us express when something comes along we really don’t want to deal with, the Not-In-My-Backyard or NIMBY syndrome. We’re willing to support certain causes and programs to a point, as long as doing so doesn’t affect our personal spaces or freedom to do what we want. Of course, if we all thought that way, there would be little progress in society.

But again to be fair, this is a natural stance to take, especially if you do not understand what is being presented to you. Over the course of our deliberations, many council members who lived along the lake were convinced to make changes for the sake of the lake and indeed to try to convince others to do so. This was a lesson to me: people can change once they are properly informed and realize that they can make a difference. In other words, education is key.

The problem, however, is that education takes time. People have to want to learn. Those who volunteer to serve on a council addressing these issues are one thing, but those who could care less about how their actions affect others and the environment are another. Governments could be helpful here, but our governments over the last few decades have been anything but.

Take our fisheries for example. In September I attended the North Saskatchewan Watershed Alliance fisheries forum in Edmonton. Like many attending, I was interested in what the presenters were going to say about the state of the fisheries in lakes and streams in the North Saskatchewan River (NSR) watershed from Jasper National Park to the Saskatchewan border. The presenters included fisheries biologists, Dr. Mike Sullivan of the newly formed Alberta Environmental Monitoring, Evaluating and Reporting Agency (or AEMERA, whatever that is), and Dr. Stephen Spencer, Alberta Environment and Sustainable Resource Development (ESRD). It also included other specialists in water pollution, invasive aquatic species and the cultural significance and importance of fishing to various peoples.

Spencer and Sullivan did not paint a pretty picture of the current situation. Spencer, who mainly discussed the lakes in the watershed, talked about how commercial fishing over the years affected fish populations, removing many of the predators (e.g., walleye) that kept the lake whitefish populations under control. The results on many lakes were populations of whitefish that cycled wildly over the years from boom to bust and back again. The fact we have over 300,000 anglers in the province fishing only 800 fish-bearing lakes illustrates how recreational fishing pressure is extreme, and why very restrictive limits and increases in catch-and-release fishing regulations on water bodies are necessary. Of course, many people like to take some fish home “for the frying pan,” so the walleye tagging program was introduced to control the number of anglers visiting specific lakes to take the popular table fish.

Sullivan related how he took a trip up to the headwaters of the NSR in Jasper National Park and found many healthy populations of fish in remote stretches of the river and associated lakes. This contrasted with the struggling populations downriver from the park. The lack of development around these water bodies and their isolated locations were the obvious reasons the headwaters populations were doing so well.

Natural vegetation in the form of forests and wetlands are the best filters of nutrients going to water bodies.

He then presented compelling evidence how nutrient loading (mostly phosphorous) was affecting the rivers and lakes outside the mountain parks. The most memorable example was Isle Lake about 80 km west of Edmonton, where toxic cyanobacteria (blue-green algae) blooms are now common. The lake is fed by the Sturgeon River, a tributary of the NSR. At the headwaters of the Sturgeon River, southwest of the lake, lies the Jackpine Grazing Reserve that was created in 1960 and where 3200 head of cattle are grazed each year on 5020 hectares (12,400 acres) of land. To create the grazing reserve, land was cleared of native vegetation that takes up and stores much of the nutrients like phosphorous before they enter into the drainage. A chief source of these nutrients is animal manure and a single cow passes 30 times the amount of feces each day that a single person does. Sure enough, Sullivan showed how the nutrient loading in Isle Lake over the years increased steadily in direct relation to the number of cattle using the grazing reserve. So, it’s not surprising that this lake has toxic algae blooms each year, a condition that is very difficult to reverse.

These figures and the effects of grazing animals on water quality have long been known. Preventative measures are available to reduce these effects, but they would require governments to take action to ensure our water quality. Like individuals, our governments also suffer from the NIMBY phenomenon, especially with regard to fish and wildlife. Despite numerous surveys showing how much people value fish and wildlife in this province and across Canada, our governments fail to protect this valuable resource, believing—despite the science to the contrary—these species will take care of themselves while the province and country seek to develop as much petroleum resources as possible before they are replaced by renewable energy sources. In the meantime, our fish and wildlife and our opportunities to enjoy them suffer. If only we had governments that understood a healthy future is dependent upon what we protect and conserve now.