Myths about Off Highway Vehicle Use

On January 20, 2017, Alberta Environment and Parks announced the boundaries for the new Castle  Provincial Park and the expanded boundaries for the Castle Wildland Provincial Park in southwest Alberta. A draft management plan was also presented for public review. That plan calls for the phase-out of off-highway vehicle use in the parks. This is one of the most controversial sections of the plan but people who are concerned about the fate of the fish, wildlife and natural beauty of that area realize such a phase-out is necessary if we are going to keep what we go to wild areas to enjoy.

Guest Blog: I’ve asked fisheries biologist Lorne Fitch to post here a piece he wrote on the subject of off-highway vehicles for the Alberta Wilderness Association’s Wildlands Advocate in August of 2016. Regular readers here will remember Lorne’s piece he posted here in 2015 about Alberta’s  fisheries: Two Fish, One Fish, No Fish-Alberta’s Fisheries Crisis.

Myths about Off Highway Vehicle Use
by Lorne Fitch, P. Biol.
Text and Photos Copyright © 2016

Myths can be widely held but represent false beliefs or ideas. They can become more powerful and compelling than reality, especially if repeated often enough, and never challenged. Many use myths to support a particular action or activity. Listening to Off Highway Vehicle users for some time provides a recurring set of statements that fall into the category of myths. These are the prevalent ones:

Reality: It is the constant, unrelenting traffic on trails (and off trails) not designed for OHV use that is the major contributor to erosion, stream sedimentation, wildlife disruption and loss of quiet recreation. That includes everyone who operates an OHV.

Myth 2. OHV users know how to operate their machines to minimize impacts and be good stewards.
Reality: The sheer amount of damage and problem areas in the form of excessive erosion, ruts, mud holes, trail widening, avoidance of bridges, collapsed stream banks, following stream courses and multiple trail development suggests anything but stewardship. Many operate their machines in ways to magnify the damage.

Myth 3. OHV use has no more impact than foot and horse use. 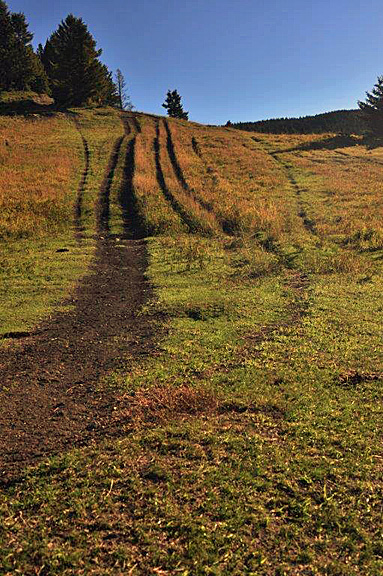 Reality: The argument OHVs exert no more pressure on the soil surface than a hiker or a horseback rider disappears under the impacts of OHV speed, spinning tires, wider trails and traffic volume. The linear orientation of OHV traffic disrupts drainage patterns, capturing and redirecting flow with increased erosion.

Myth 5. The solution to the problems of OHV use includes more and better designed trails with bridges over streams.
Reality: Linear density (the measurement of trail length/ landscape area) already exceeds critical thresholds for many fish and wildlife species; building more trails will significantly harm fish and wildlife populations, several of which are already designated as “threatened”. More trails will intersect or parallel watercourses and require more bridges. Bridges do not successfully deal with sediment from trails since it is the approaches to stream crossings that continue to erode under OHV use.

Myth 6. Use of OHVs is a traditional, family-oriented pursuit that brings Albertans closer to nature.

Reality: While OHVs provide opportunity to access nature, to drive through (or over) nature there is no conclusive evidence their use connects people with nature. OHV use is a pursuit where people substitute gas engines for natural locomotion and distance themselves from the landscape with speed, technology and an obstacle-course mentality. Most seems activity focused, more so than using the machines to reach a destination, from which a direct connection is made with the landscape by walking. Activities like making new trails, racing, getting stuck, hill climbing, mud bogging, trashing wetlands and splashing through (and up) streams seem inconsistent with an appreciation for nature.

The phenomenon of OHV use is less than two decades old in Alberta, given that statistics on OHV ownership indicate relatively few people owned such machines even 15 years ago. Only 6% of Albertans engage in motorized recreational activity; 67% of Albertans have a preference for non-motorized outdoor recreation. Demographics suggest OHV users are more likely to be younger, male and single than a family group.

Myth 7. Other land uses (like logging) are more destructive that anything done by OHV users.

Reality: Resource extraction industries have created much of the access used by OHV users and the failure of government agencies to effect trail closure and restoration has exacerbated the issues. However, OHV use has never been considered and dealt with as a land use, complete with policy and regulation. In deflecting criticism from the impacts of OHV use, users fail to recognize cumulative effects and their contribution. OHV use can delay and prevent effective restoration and extends the life span of industrial impacts. 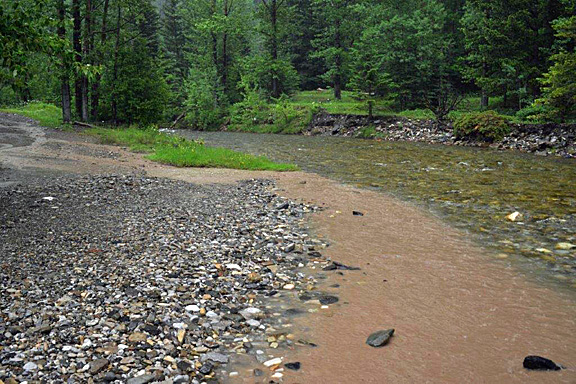 The mud OHVs create on trails often drains into streams where it impacts fish.

Reality: Education can be a tool for those that recognize the issues, want to change their behavior and don’t have a sense of entitlement to freely engage in destructive OHV activity. The education option assumes people want to be educated, that voluntary behavioral shifts are possible with no other inducements (like regulation and enforcement), that forums exist where OHV users can be educated and that all users can read and respond positively to signage.

Education is not a public relations exercise by OHV users to maintain the status quo; it is an endeavor to change attitudes and actions. Only a small percentage of OHV users are represented by an organization. Most users are beyond the influence of an organization and any educational initiative.

Studies indicate OHV users don’t want their use restricted, want fewer regulations, do not support user fees, enforcement and government involvement, and want to continue to pursue their recreation with less, not more impediments.

Myth 9. There is a recognition amongst OHV users of the impact of their activity.

Reality: OHV users become more conditioned to negative impacts over time, less sensitized to damage the activity creates, causing the detrimental effects of OHV activity to become less (not more) obvious and less (not more) concerning. It is a case of perceptual blindness, an inability (or unwillingness) to recognize and acknowledge the obvious.

Money spent on OHVs and their use is discretionary, unlike mortgage payments, grocery bills and taxes. If people don’t spend such money on OHVs the money isn’t lost, it is redirected somewhere else in the Alberta economy. Most of the money spent to purchase an OHV and accessories doesn’t linger in Alberta; it enriches corporations far from Alberta.

The assertion of economic benefits from OHV use always fails to account for costs, including more road maintenance, fire suppression, weed control, emergency services, medical expenses from injuries and loss of economic benefits from bona fide land uses like ranching, equestrian use and ecotourism. Nor do the “benefits” factor in enforcement costs, trail restoration, impacts on downstream water users and loss of biodiversity (including declining angling and hunting opportunity).

OHV activity also precludes other recreational pursuits and the associated economic benefits due to avoidance of areas by people seeking quiet recreation because of noise, real and perceived harassment, concerns of individual safety and loss of ecological integrity.

When our “enjoyment” of the landscape blinds us to the impairment occurring it is time to ask whether the activity is legitimate. Repeating the myths of OHV use, in the hope the messages will become convincing will require an unattainable magic. Substituting myth for fact isn’t viable and risks continuing the stereotyping of OHV users as uncaring, thoughtless and irresponsible. At its root, reality is consensual. When a group, like OHV users, makes up its mind what it is going to see, then sees it, it is a crowd delusion. OHV use will never, and should never, trump watershed protection, maintenance of fish and wildlife populations (especially threatened species) and quiet forms of recreation that reconnect people with nature.

Lorne Fitch is a Professional Biologist, a retired Fish and Wildlife Biologist and an Adjunct Professor with the University of Calgary.

Comments are welcome (below); but you may also contact Lorne directly at lafitch@shaw.ca

Lorne has also posted a guest blog on why OHV users might not understand the damage they do, Tracks and Spoor.

26 Responses to Myths about Off Highway Vehicle Use