Posted on 2017 December 4 by Don Meredith

[Note: The following was first published in the November 2017 Alberta Outdoorsmen.]

Ever since I first witnessed a dark sky on a clear night away from urban light pollution, I’ve always been fascinated with astronomy. On seeing the Milky Way and the myriad stars and planets, I can’t help but be enthralled with the vastness of our universe, our extremely small place in it and the processes that brought us to where we are. That’s why when I first heard about the total eclipse of the sun that would cross the United States this last August 21st I knew I had to witness the phenomenon.

Totality during he solar eclipse in Wyoming. Fortunately, the wildfire smoke above us wasn’t as thick as it was around us.

One of the better places to view the total eclipse was Wyoming, straight south of Alberta. It had the best chance for a clear sky. Sure enough, when Betty and I arrived at our appointed location in the desert east of Shoshoni early in the morning of the 21st, the sky looked promising, although a few high level clouds did cause some worry. Also of concern was the wildfire smoke in the air that was visible all around us. However, by the time the eclipse got underway, the clouds had dissipated and the smoke between the sun overhead and us was not as thick as it was looking at the horizon. As a result, we had an excellent experience that will not be forgotten.

Also not easily forgotten was the wildfire smoke we experienced throughout our trip. Since driving to the eclipse site was going to take a couple of days and the crossing of a border, we decided to make an extended trip out of it. At first we planned to do some river rafting and fly fishing with friends in Missoula Montana before the eclipse. But as the date approached, our friends informed us that fishing had been closed as a result of warm river water and the thick smoke from local wildfires was impacting outdoor activities. They recommended we postpone that adventure until another time. So, we bypassed western Montana but not the smoke and smell of fire.

After the eclipse, we headed for Grand Teton National Park to continue our tour of the west. Slowly passing through traffic jams as a result of the thousands of eclipse watchers moving on to other places, we finally arrived at the park to see the spectacular views of the Teton Range shrouded in smoke from wildfires in Wyoming and Idaho. When we crossed into Utah and Nevada the following days, smoke was always on the horizon.

Our next stop was Yosemite National Park in California. Yosemite was one of my favorite stomping grounds in my youth. I’ve hiked many of its trails, including the John Muir Trail that starts there. Betty had not seen the park before and I didn’t want her to pass up a chance to experience Yosemite Valley. The spectacular granite domes and monoliths that tower over the valley are somewhat like a dark night sky or solar eclipse; they must be experienced to be appreciated. 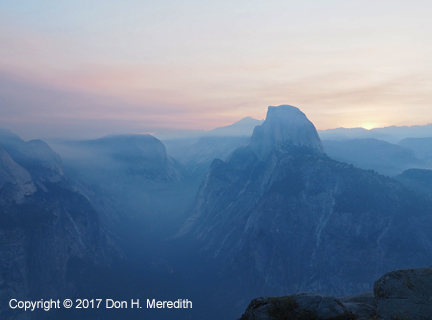 Half Dome and the other iconic granite monoliths of Yosemite Valley were shrouded in smoke this summer.

But alas, smoke plagued the valley just like it had in Alberta, Montana and Wyoming. However, this wasn’t smoke from wildfires but smoke from “management fires.” The park service was burning sections of Yosemite’s forest to reduce the amount of fuel on the ground. In 2016 Yosemite had been threatened by large wildfires west of the park as a result of several years of drought in California. This year wasn’t quite as bad but it still was dry, campfire bans were in effect and the forests were threatened by the large amount of dead, dry wood.

That’s not to say we didn’t see the sights. We did and enjoyed our visit. Indeed, the smoke made for some interesting photographs, though nothing like we’d hoped.

Our trip continued on to the Oregon coast where we had hoped to get out of the smoke and enjoy some of the state’s spectacular beaches. But on crossing the Coast Range we found the smoke to be thicker, obscuring much of the coast’s features. It turned out there was a wildfire in the south Coast Range that was threatening communities and casting smoke up the coast.

That and the smoke of several fires in the Cascade Mountains to the east plagued us all the way through Washington State and into British Columbia. Of course, BC had its worst fire season in history this summer. Fortunately the smoke from those fires had largely dissipated by the time we got there, as cooler and moister weather brought some needed relief. Although Alberta had its share of wildfires this summer, it was nowhere near what BC had endured if you don’t count the fire that came over the divide burning a good portion of Waterton Lakes National Park and some of the Castle region.

It was indeed a fire season for the record books all across western North America. But so were the fire seasons of previous summers in many jurisdictions. What we are most likely seeing is the new normal for summers as climate change keeps on coming. Fire seasons are getting longer and fires more robust.

A few years back I did some research for Parks Canada on what the recent scientific literature was saying about the future of some of our parks with regard to the changing climate. Several of the papers reported that fire would be one of the major agents of change, taking down forests and making room for new growth that might not include the same species of plants that had been there before. Several scenarios predicted that grasslands would replace many forests in the drier eastern slopes of the Rocky Mountains as well as those of the parkland and boreal regions of our north. Many parks in the U.S., Russia and Canada, especially in the far north, were already reporting large-scale changes to vegetation: treeline moving up in elevation in the mountains, shrubs and trees invading arctic tundra where they’ve not been seen before. As well, these changes are affecting the movements of migratory animals, such as caribou.

Back in February of 2016, I wrote in this column about the Montana Wildlife Federation 2015 report “The Impact of Climate Change on Montana’s Outdoor Economy” that described how Montana’s economy, and especially its outdoor economy, was and will be negatively affected by climate change. It was a sobering report designed to help governments, businesses and individuals plan for the future.

This year the Montana Institute on Ecosystems (Montana University System) issued its 2017 Montana Climate Assessment. This report focussed on the future of Montana’s water, forests and agriculture. It predicts that Montana’s snowpack will lessen, shifting stream flows and raising water temperatures—all affecting the fish species that currently inhabit those waters. Changes in precipitation will likewise negatively affect both forests and agriculture. The report recommends immediate remedial actions to reduce wildfire risks, plan for less productivity in both forestry and agriculture, and that producers diversify their operations to adapt to the changes.

So far, we haven’t seen a similar report here in Alberta; although it’s not hard to extrapolate what’s predicted for Montana to Alberta. One thing is for sure: climate change is here and the coming changes will be dramatic. The smoke we’ve all witnessed this summer is speaking to us loud and clear. Change is happening and we’re going to have to adapt.