How Did They Get Here?

I wrote this piece back in 2005 that describes how our native fish arrived in Alberta. I’m posting it here because I believe it’s important information to understand when we talk about species-at-risk and why protecting habit and wild places is so important, not only for the well being of these species (many of which are species-at-risk), but also for our understanding of our connections with the land and environment. There’s something special about catching a native fish, whose ancestors migrated to the water body a few thousand years ago and subsequently evolved with the water body to best exploit its features. You don’t get that special feeling catching a fish that has been stocked from a hatchery.

[Note: The following was first published in the 2005 Alberta Guide to Sportfishing Regulations.]

Whether jigging through a hole in the ice, rocking in a boat on a gentle summer lake or casting a fly along a cool foothills stream, my mind tends to wander. Indeed, that’s one of the benefits of a fishing trip—the time it allows your mind to relax and consider things that are not of immediate concern but might broaden your perspective on the world. Being a biologist, I enjoy thinking about what’s going on around me in the natural world. Why is that squirrel chattering, that hawk circling or that coyote howling? Why does a fish like a certain color lure over another? How did the native fish I’m trying to catch get into this particular lake or stream?

Have you ever thought about that last question? It’s an easy one to dismiss by assuming the fish have always been in the particular water body. However, they have not always been here. In fact, like most species of plants and animals in this province, the fish that currently occupy our water bodies have only been in Alberta a few thousand years—barely a hiccup in the vast span of geological time. 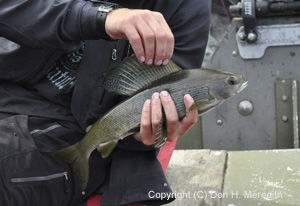 Arctic grayling most likely invaded Alberta from the north as the ice retreated.

Although the fossil record indicates fish have occupied the province for hundreds of millions of years, there have been breaks in that occupation. Over the last one-and-a-half million years or so, Alberta has been covered in glacial ice several times. The most recent glaciation occurred from about 20,000 to 13,000 years ago, and covered much of Alberta in ice thousands of metres thick. Most life was pushed out of the province and took refuge in areas where the ice did not extend.

According to the late Drs. Joseph Nelson and Martin Paetz, who summarized the scientific studies about fish reoccupation in The Fishes of Alberta (1992, University of Alberta Press), present-day fish species reinvaded Alberta from three distinct areas that were ice-free during the last glaciation. Those three areas, called refugia, occurred in the present-day Missouri and Mississippi drainages south of the Canadian prairies, the Columbia River drainage south of British Columbia, and the Yukon River drainage north of British Columbia. As the ice melted, exposing barren land, new drainage systems formed to move the melt-water. The melting didn’t happen all at once. Lakes and streams formed only to be replaced by others as ice or debris dams broke and new heights of land were exposed by the retreating ice.

As the ice retreated, fish from the refugia searched the new drainages to exploit the plant and animal life beginning to take up residence in the water bodies. Some of these drainages led to lakes where substantial fish populations could be sustained. Two large lakes that formed at the base of the retreating ice mass were the Glacial Lake Edmonton complex in Alberta and Glacial Lake Agassiz in portions of Saskatchewan, Manitoba and Ontario. These huge water bodies stretched across present-day drainages and provided routes for many species from the Missouri—Mississippi refugium to occupy new water bodies in Alberta, especially in the Saskatchewan, Athabasca and Peace River basins. According to Nelson and Paetz, well over half (38) of the 59 species of fish that occupy the province today (both game and non-game species) came from the Missouri—Mississippi refugium, including the mooneye and northern pike.

The Yukon refugium shared many species with those found in the Missouri—Mississippi refugium. As the ice retreated from the McKenzie, Peace and Athabasca drainages, such fish as Arctic grayling, burbot, northern pike, lake trout and lake whitefish reinvaded the province from the north. This is probably the chief route the Arctic grayling used to populate northern Alberta. The other fish may have reinvaded from both the north and south. 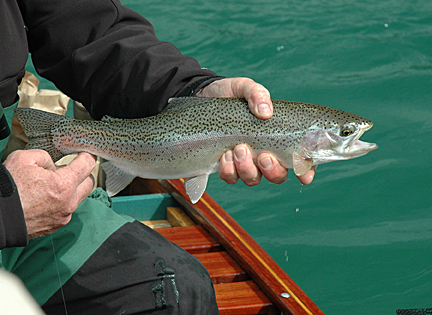 Although rainbow trout are found in many lakes and streams in the province, most were stocked from hatcheries.

Nine species of fish invaded the province from the Columbia River refugium, including bull trout, cutthroat trout, rainbow trout and mountain whitefish. These fish followed the retreating ice into British Columbia and up the valleys of the Rocky Mountains. As on the prairies, melting glaciers formed large glacial lakes in the mountain valleys. One of these north of Prince George allowed fish moving up the Columbia and Fraser rivers to invade what became the Peace River drainage in northern B.C. and Alberta. A similar connection between Moose Lake at the headwaters of the Fraser River in B.C. and the Miette River in Jasper National Park explains Alberta’s only population of native rainbow trout in the headwaters of the Athabasca River. Other connections over low passes in the southwest Rockies account for invasions of bull and cutthroat trout and mountain whitefish into Alberta streams.

Today, rainbow trout are found in many streams and lakes throughout the province. However, most did not occupy these areas through invasion. As described above, only the rainbows found in the upper reaches of the Athabasca River invaded the province following the retreating ice. Most rainbows found in Alberta today were originally stocked from hatcheries in the early 20th century to satisfy a growing demand by anglers for more trout in mountain lakes and streams. Many of these introductions were successful with the rainbows establishing breeding populations. As a result, the government developed fishing regulations to conserve these naturally reproducing populations and eliminate the need for costly restocking.

The rainbows found in the so-called “pothole” lakes across the province have also been stocked from hatcheries. However, because these lakes do not have inlet or outlet streams, the fish do not have access to the stream-bed gravels required for spawning. Therefore, these populations cannot reproduce themselves and require regular restocking.

Of the 59 breeding species of fish found in Alberta today, people introduced eight from outside the province and therefore are not native to the province. Two of the most successful introductions were the brook trout which is native to eastern Canada, and the brown trout which is native to Europe, Asia and northern Africa. Both of these species established breeding populations and are prized by anglers. Other introductions were not successful, such as several species of salmon, Arctic char, and large- and smallmouth bass. These species were unable to establish breeding populations for a variety of reasons and illustrate the importance of suitable habitat to an invading or introduced species. If invading species cannot find conditions suitable for feeding or breeding they have to move on. As well, competition with other fish species plays an important role. For example, trout generally do not survive well in water bodies occupied by northern pike.

As you fish your favorite water and contemplate the workings of the natural world around you, you might want to ask just how the fish you are about to catch got into this lake or stream? Did its ancestors come from over the mountains, or from refugia in the north or south? Or was the species stocked from a hatchery? The answers to those questions provide me with the added dimension of time to my outdoor observations, and help me better appreciate what we have and what could happen in the future.