[Note: The following was first published in the June 2017 Alberta Outdoorsmen. Revised in July of 2019]

It has been a while since I wrote a column about what is happening with the Wabamun Lake fishery. Wabamun is a very popular recreation lake located 70 km west of Edmonton. At one time it was one of the most productive fisheries in the province. My last column on the lake appeared in October of 2012 and was a general overview of the situation at that time. As many remember, the lake suffered a train derailment and catastrophic oil spill in 2005, and people were wondering how the fishery was doing as a result.

Not that long ago, Wabamun was one of the most productive commercial fisheries in the province.

In that column I reported that most mature fish had survived the spill but the lake whitefish population had taken a hit because the pollutants from the oil had affected the survivability of whitefish eggs. Although Alberta Health had found low levels of petroleum pollutants in the flesh of fish shortly after the spill, tests several months later confirmed those chemicals had not persisted and most fish were O.K. to consume. The one exception to consuming fish was the ongoing issue of mercury in older fish, especially pike. However, the mercury pollution is not related to the oil spill but comes from the air as a result of the burning of fossil fuels and forests. 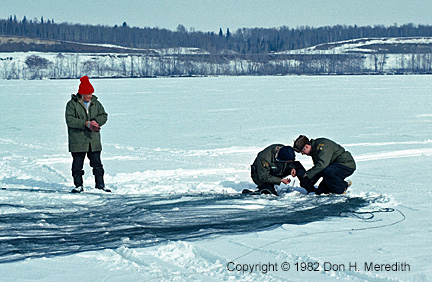 Although most fish could be eaten, Alberta Fish and Wildlife imposed a catch-and-release (C&R) regulation for all species in the lake in 2008 to allow fish stocks to recover. As a result, within a few years, anglers were catching trophy-size northern pike that normally are only found in northern fly-in lakes. This fostered the idea that perhaps Wabamun should be developed as a trophy pike fishery, unique to a lake so close to a major metropolitan area.

As I related in 2012, the Alberta Government has long tried to reintroduce walleye to the lake. However, the introductions were not successful. This was most likely because the Wabamun power plant used the lake as its cooling pond since 1956, raising lake water temperature and causing walleye eggs to hatch too early in the spring for the fry to survive. The power plant ceased operations in 2010, so the government decided once again to introduce walleye in 2011. This introduction appears to have been successful, as there is evidence the walleye are spawning and the young are surviving. No further introductions have been made since 2014.

In March of 2017 Alberta Environment and Parks (AEP) issued a long-awaited “Wabamun Lake Fisheries Management Update”. The document lists the fisheries management objectives for the lake and the status of the fish populations based on a 2015 Fall Index Netting (FIN) study (PDF), where standardized multi-mesh nets are placed at random locations around the lake for about 24 hours. The number of fish of each species caught over that time is used to determine that species’ Fish Sustainability Index, where the risk to the sustainability of the population is rated as either Very Low, Low, Moderate, High or Very High Risk. The following are highlights from the update.

Walleye: The restoration continues. Although it was predicted back in 2012 that a harvestable population of walleye might be possible within three to five years (about now), the government now predicts a sustainable harvest will not be available until five to seven years from now. Then it is hoped the walleye now being produced in the lake will reach maturity in sufficient numbers to produce a harvestable surplus. For these reasons and a low FIN catch rate, walleye are classified as Very High Risk, and the no-harvest regulation continues.

Northern Pike: Trophy status for this species is confirmed for the lake. The status is based on the large pike being caught and a 2013 survey of anglers coming off the lake, in which more than 80% supported having opportunities to catch trophy pike. However, a low FIN catch rate places the pike at High Risk, and all pike caught must be released.

Lake Whitefish: Perhaps the biggest disappointment with this update is the status of the lake whitefish population. For much of the 20th century, Wabamun was one of the biggest commercial producers of whitefish in the province. In some years, commercial fishers caught from 200,000 to near 500,000 kg (440,000 to 1.1 million lbs.) of whitefish. It was also a popular sport fish, especially in the winter. However, since the oil spill of 2005, the FIN catch rate for whitefish has been on steady decline. Thus, the population remains in recovery and the no harvest regulation continues.

There was no mention of yellow perch in the update, but the FIN summary reports only one perch caught. So, the lake remains C&R for all species for the next few years. The status of the fishery will not be revisited until 2020 when another FIN study will be undertaken. In the meantime, the government intends to consult with a wider range of anglers about what they would like to see on the lake: continue all C&R, trophy pike, harvestable walleye, whitefish and perch…?

Meanwhile, anglers are catching many healthy walleye they must release. They are also catching some thin and seemingly unhealthy pike, and very few whitefish and yellow perch. As a result, many believe the walleye are negatively affecting the pike, whitefish and perch.

During a meeting with members of the Wabamun Watershed Management Council in April, government fisheries biologists Stephen Spencer and John Tchir stated that the low numbers and poor quality pike, whitefish and perch being reported are natural fluctuations of populations as a result of a new top predator (walleye) being introduced to the lake. Once the populations adjust to the new situation, numbers should improve.

Catch-and-Release Mortality: Tchir also mentioned that foul hooking or rough handling by anglers—damaging gills and internal organs—could cause the thin pike being observed. He mentioned there is a large “recycling” of fish in a C&R fishery close to a city. The chances of a fish surviving several handlings by anglers are reduced each time the fish is caught.

If that is the case and C&R is necessary to produce trophy pike, perhaps a trophy pike lake so close to a city is not possible or desirable…? Or perhaps there needs to be more strenuous rules regarding C&R fishing, such as banning the use of bait and treble hooks…? Fish tend to swallow baited hooks more readily than non-baited ones, and treble hooks are harder to dislodge from a fish’s mouth, increasing the chance of injury while handling.

And I would be remiss not to mention that a group of former government fisheries biologists believe that the growing population of walleye in Wabamun needs to have a limited harvest to control the population growth and allow the other species to better adapt to the new predator. Many also question why walleye were introduced in the first place, when the lake 1) was recovering from a catastrophic oil spill, 2) was being groomed as a trophy pike lake, and 3) was seeing its whitefish population plummeting? Perhaps walleye were not meant to be in Wabamun at this time…?